Last week, we made it to Portland, Oregon and Voodoo Doughnut. Today, we are still in Oregon. I’m pretty sure we will be in California later today, but Oregon is making it hard to leave. We spent several days on the coast. We camped at Lookout Point, where we could hear the ocean from our campsite. The sunset was gorgeous. 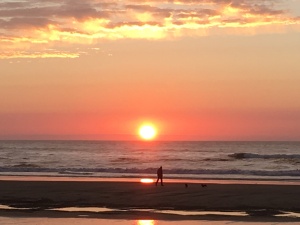 We spent three nights in Tillamook, at the Western Royal Inn. That was not our original plan, but my husband had a health problem that cropped up on Friday and we needed to hang around until Monday for a follow-up appointment. He was okay after treatment and we took advantage of the extra time in Tillamook to see some more of the Oregon coast. We saw the shortest lighthouse on the Oregon coast, on Cape Meares, and the tallest one in Yaquina Head State Park. 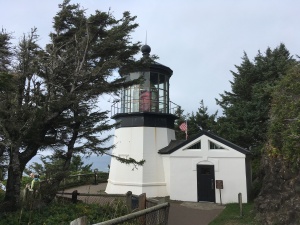 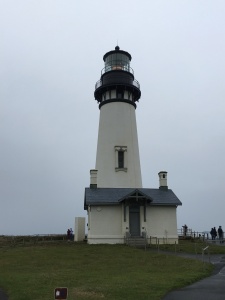 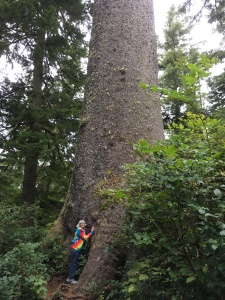 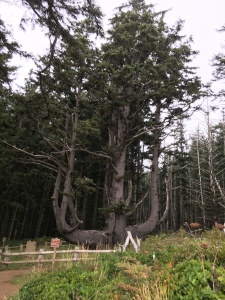 We saw trees so mossy, they looked as if they had soft green fur coats. Forests here are deep and wet. We haven’t seen a Sasquatch yet, but we wouldn’t be at all surprised to run into one among these endless tall trees. 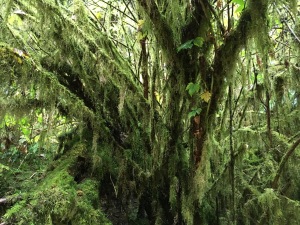 Yesterday, we made it to Crater Lake, which was fogged in and surrounded by snow-covered evergreens. We stayed there quite a while, throwing snowballs at each other and marveling at the view. Our patience was rewarded when the wind picked up a bit and cleared enough of the fog that we could actually see the lake. I have never seen water such a deep shade of blue. Pictures don’t do it justice, but I will add some anyway. We took dozens. 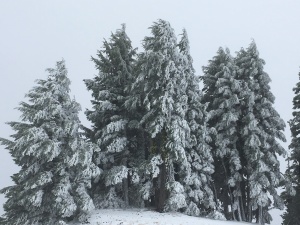 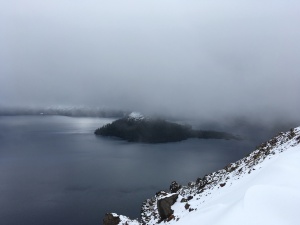 When we finally pulled ourselves away from Crater Lake and got back on the road, our journey was blessed with a beautiful rainbow. 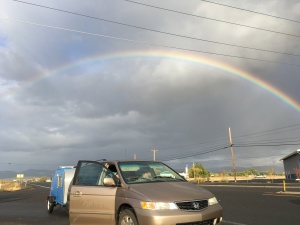 Oregon, how can we leave you?

I blogged early last week because I was going out of town for a long weekend in the mountains. My husband and I have a small piece of property in Western North Carolina and he wanted to visit before the trees and shrubs leafed out, so he could see the true lay of the land. Our bit of hillside is just over a ridge from my sister’s property, where she and her husband built a cottage last fall. The cottage will be their summer place and they were hoping to live in it a bit last year before wintering in Florida, but it wasn’t finished in time, so this was their first visit, as well as their first time hosting guests.

We had been keeping an eye on the weather for weeks, trying to find a time when the travel and access would be safe for Florida flatlanders in a two-wheel-drive vehicle. We chose this past weekend because there were supposed to be two days of full sun after a couple of rainy days, one of which would be our travel day. We figured we’d be okay as long as there was no frozen precipitation.

We left here early Friday morning and enjoyed a reasonably dry trip on the interstate, where we saw early spring flowers in the fields and on the fences throughout Georgia and South Carolina. In North Carolina, the only color came from daffodils, but they were everywhere. The gravel road to the cottage was a little wet, but easily passable. We had run into some brief showers on the road, but no heavy rain, and we hoped Saturday would be the same.

We slept in a bit on Saturday because we had celebrated our first evening in the new cabin with wine and Whist. I’m not very good at wine (I took a sip to toast our first night in the new cottage) but I’m great at Whist. Well…I’m great at having a good time at Whist even if I’m not getting good cards and I keep having to play forced fours. I love Whist as long as there’s a hope that I might get a good hand the next time. Whist and Chicken Foot are the only things that will keep me up past nine o’clock.

We went to town on Saturday to do a little shopping. It was gray and wet in Burnsville. That made it a good day to get in some groceries and sundries. When we started to get hungry, we decided to go to Spruce Pine. There was a pizza restaurant there with a microbrewery. We had tried to check it out on previous trips but never managed to catch it on a day that it was open. Saturday seemed like a good bet and it sure wasn’t a good day for sight-seeing.

We were just sitting down in the pizza place when my sister got a phone call from her North Carolina neighbor, alerting her to a new weather forecast which included the possibility of snow. Snow? We had chosen this weekend because there was no ice or snow in the forecast! Now they were saying we might get one to three inches during the night. We enjoyed our pizza (my husband enjoyed his flight of six tiny glasses of beer) and then headed to a grocery store to make sure we would have enough food to get us through Sunday, just in case there was enough snow to keep us from wanting to chance the gravel road. Some folks were still saying there might be no snow, or it might not stick if it fell.

Back at the cottage, we played more Whist and went to bed pretty late, with no sign of snow coming down outside. My brother-in-law was the first one up in the morning and asked us if we had looked out the window.

He didn’t answer, so we got up and looked out the window. Yes, there really was snow! There was a light dusting on all the trees and on the ground and on the front porch of the cottage. We wouldn’t have come if we’d known it was going to snow, but it sure was a nice treat to see it from the warm coziness of the cottage. Of course, my husband had to go out on the porch and build a tiny snowman.

The sun came out in the afternoon and melted all the snow, but the snowman will live forever, because I painted this itty bitty portrait. 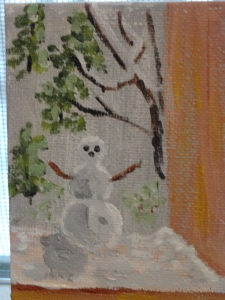