I have the Weather Channel on as I’m writing this and the big story is winter storm Cleon. This storm is covering most of the United States in sleet, snow and freezing rain, but here in North Florida, we had near-record heat today. The weather was so pretty, we decided to go to the zoo. If you live in or near Jacksonville and you have never been to the zoo, you are missing out on a delightful family-friendly adventure.

I always buy a membership in the Spring, when we have a little extra money, so we can go to the zoo any time during the year, even when money is tight. If I didn’t do that, there would be no way we could afford to go in December, when there are so many other demands on the budget. The membership pays for itself with just a few visits and our zoo is worthy of multiple visits during the year. This way, we can take our time when we’re there, without feeling as if we have to see every single animal every time we go.

Today, we asked my five-year-old grandson where he wanted to go first and he wanted to see lions. They were looking good. 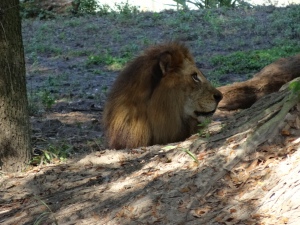 This is Jacksonville and we love our NFL team, so our zoo has a fabulous exhibit called Range of the Jaguar. Right now, there’s a young jaguar. My husband caught a picture of the mother and baby through the window of the Lost Temple.

The Lost Temple has poison dart frogs and lots of huge lizards and snakes, plus my favorite primate, the pygmy marmoset. There is also an adorable sloth. I love the way these guys move in slow motion.

You might think that the animals are the coolest things at the zoo, but for children, there’s something even cooler – the playground. It has slides, a climbing wall and a big central tree house, with a giant bird’s nest, a rope bridge and a climbing net. I watched my daughter climb the net with no problem and then I watched my fourteen-year-old grandson give it a try, an attempt that was not successful. This made me curious. It looked easy when my daughter did it and it looked impossible when my grandson tried it, so I wondered just what it was about a climbing net that gave my grandson so much trouble. I made my own attempt. It seems that as soon as I had two hands and two feet on or in the net, I could not figure out how to move one of them. I began to sympathize with my grandson. I clung there for a while (perhaps I should mention that the zoo was not crowded today; I would not have been trying this if there had been a line of six-year-olds behind me) and then I gave up and took the stairs. Then I decided to give the net one more try, from the top. This was so funny, my grandson thinks the video should go up on Youtube. I disagree, but I’ll allow a still shot.

The point is, I made it to the bottom without hurting myself. Yay! At the bottom is the coolest thing in the whole zoo – a squishy rubber surface. If you go to the zoo, do not miss walking on this squishy stuff. It’s so amazing, you’ll wish all the zoo walkways were covered in it.

I had a great day at the zoo and I also managed to do a sketch of a leaf. 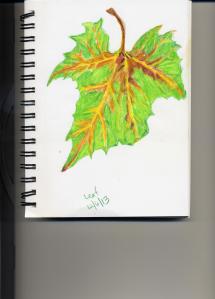 Because that list of Fifty Things is not going to fill itself.