Okay, it’s blog time again and I want to report from my real life and my real heart, but there’s not a whole lot of reportable stuff going on right now. I got back from the North Carolina trip and got caught up on chores. Nobody wants to read about my bill-paying and grocery-shopping. The time I don’t spend on chores I spend watching political things on television, and I’m absolutely not going to blog about that. This is not a political blog. Just reading the ones I read and seeing the vitriol in the comments makes me question my faith in humanity.

I don’t want to lose all faith in humanity. I know the vicious people are a small minority, but they’re a loud minority and they make me sad, so I won’t be opening up my blog to that sort of virulent discussion. Nor will I waste my time preaching to the choir of my regular followers. You know where I stand.

If I want to be topical and I don’t want to be political, that leaves the weather and Pokemon Go. The weather is hot and I’m not playing Pokemon Go. My daughter wants me to play Pokemon Go, but, so far, I have resisted the temptation. I may be weakening.

She does seem to be having a good time. Today, she caught a Pikachu with more than three hundred CP. “Is that good?” I asked. Apparently, that is good. Even though Pikachu is the only Pokemon almost everyone has heard of, it’s not particularly common in the game. When you do find one, it doesn’t usually have much CP, and three hundred is a lot (at least for a Pikachu – I’m still a little fuzzy on the details). If you’re like me, you hear something like CP and you want to know what the letters stand for, so (now that I’ve asked my daughter) I will tell you. It’s Combat Power. That sounds intriguing and I want to know more.

Yes, I may be weakening.

Here, it’s hot. Still, it’s nice to be home (home, you should know, has air conditioning). After camping for nearly two weeks, it’s nice to be sleeping in a real house. It’s nice to wake up in the morning and plug in an electric kettle to heat water for coffee, instead of pretending to be asleep until my husband gets up and puts a kettle of water to heat on the propane stove. I know how to use a propane stove; I just prefer not to.

It’s nice to be sleeping in a king size bed instead of a four-foot wide teardrop trailer. It’s nice to be able to sprawl without bumping my head or my elbow or my sleeping (at least until I accidentally jab him while trying to adjust my position) husband. It’s nice that modern plumbing is just a few steps away, under the same roof. I won’t go into the “instead of” here. It’s complicated.

Yes, I am glad to be home. I have to admit, though, that I miss my sister and brother-in-law, who are still in North Carolina, and I miss my Turk’s Cap Lilies. We didn’t know they were Turk’s Cap Lilies when we first spied the tall plants on our land. They were striking because of the whorled leaves and the many thin buds at the top, so my husband googled them. He told me what they were and then we waited for them to start opening up.

The two plants just happened to be the first thing I saw each morning as I looked out the window of the teardrop trailer. The blossoms opened one after another until there were more than a dozen of them. The last one opened up the morning we had to hitch up the trailer and head home.

I was glad we didn’t miss it.

I am trying to blog from my phone and I haven’t tried that before, so this could be a bumpy ride. Wednesday is my usual blog day but I spent Wednesday in Asheville,  North Carolina. I planned to write a blog post when I got back to my campsite in the evening, but it turned out I couldn’t get WordPress to load without wifi. Now I’m in my sister’s cottage, borrowing her wifi (thank you, Lucinda!) so I will give it another try.

Asheville is often called the Paris of the South because of its commitment to the arts and its acceptance of all things quirky. The first interesting thing that caught my eye was this bucket list board on the edge of a construction site in the middle of town. Chalk is provided.

My husband and I browsed our favorite independent bookstore,  Malaprops, where I found a new novel, and then started trying to decide where to go for coffee. This is a tough decision in Asheville, where there’s a charming coffee shop on every corner, but we finally decided to go to City Bakery, where the sweet treats are as irresistible as the coffee.

Thus fortified, we ventured back out into the streets, where art is everywhere. My husband had a specific goal in mind for an afternoon beer, but spied a new place on the way and decided to try it. His beer was hoppy; mine was root.

After that stop, we did some more window shopping on our way to his original goal, the Funkatorium. This is an offshoot of Wicked Weed and specializes in sour beers. 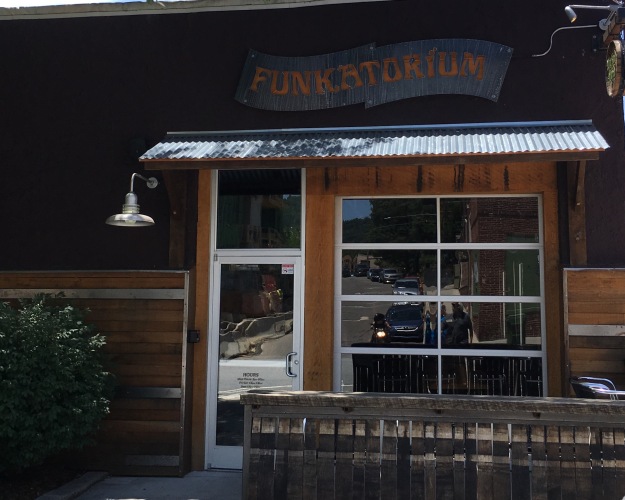 He had a flight, so he could taste four beers.  He pronounced them all excellent. I took a small sip of each one and liked the Bombadile best. It tasted of strawberries.

Once we left the Funkatorium, we were ready to start thinking about supper.  Choosing a restaurant in Asheville is harder than choosing a coffee shop, for pretty much the same reason. There are just too many wonderful restaurants, with new ones opening all the time.

We ended up at Blue Dream and were not disappointed. They offered a concept we hadn’t seen yet in America – no tipping. The menu explains that their servers are well paid, with raises and bonuses, and the prices listed take this into account.

I had a curry dish with paneer. It was delicious.

Storm clouds were rolling in as we finished our supper, so we high-tailed it back to our parking garage and reluctantly said adieu to the Paris of the South.

I took more pictures during our visit, but I think I’ve reached the limit of this Worpress app. Okay, I meant my patience. It amounts to the same thing.

Ready or not, I’m going back to the mountains in the morning. I guess I’m ready. My suitcase is packed and loaded into the van. My Autoharp is by the door. Even though the sun is going down, it’s still too hot to leave a musical instrument in the van overnight in Florida. The food and the coolers will go in tomorrow, too. Also my overnight case, because that’s where I pack my morning pages and I can’t pack them until after I write tomorrow’s pages.

Last week, I mentioned that I had paperwork to get done and that we had bought a new printer so I could do it. That printer printed out my inventory worksheets just fine. We counted everything and then I balanced the inventory to the sales tickets. That was an adventure, but I got everything to zero eventually. Then I started on my sales tax spreadsheet. That was an even bigger adventure. I never quite got the sales tickets to balance to the deposits, but I got within $5.00 after re-counting everything several times, so I called it close enough. Then I tried to print out my spreadsheet.

That was when the adventure really started. I did what I had done before to print out spreadsheets and the printer spit out two pages. Two pages of weird symbols and gobbledegook. I hollered for my husband, the retired Information Technology Manager, and then I stepped aside so he could make the printer behave. He eventually did that, after printing out way more than two pages of weird symbols and gobbledegook.

He still doesn’t know how he got it to print the spreadsheet correctly. The important thing is that he did and I was able to use it to fill out my sales tax return and send it off to the Department of Revenue with a check, which is definitely for the correct amount, to the best of my knowledge, or possibly for thirty-three cents too much. Either way, they are getting everything they should be getting. That’s the important thing.

I guess that’s two important things in one paragraph. Sloppy of me, but I’m tired and I have to get up ridiculously early in the morning. There is one more important thing I want to mention before I end this post, though. The spell-check on my iPad actually knows the word “gobbledegook.”