If you are a regular reader of this blog (there are a few of you out there – even one or two who are not related to me), you’re probably wondering when I’m going to set a goal for my third blog year. I’m six weeks into it and I haven’t said anything about a new goal. There’s a reason for that. I’ve actually been toying with the idea of not having a specific goal this year.

As a procrastinator, I end up putting a lot of pressure on myself in the last month of my blog year. January was intense this year. I met my goal of creating fifty paintings before my February 8th blogiversary and then I just collapsed for a while. I thought about new goals, but I couldn’t make myself commit to anything. I was blogging every week. Wasn’t that enough?

I want to paint outdoors. I want to learn to be a plein air painter. If I set a goal of painting fifty paintings en plein air this year, I can’t just put off half of them until January. Even in Florida, January is not a great month for painting outdoors. I might have one or two nice days; I’m not going to have twenty-five. If I set this as a goal, I’m going to have to keep up with it. I’m going to have to do my painting while the sun shines. To complicate things, I have a day job as a tie-dye artist. This also requires working outdoors in reasonably good weather, and I’m about to enter my busy season.

I have plenty of good reasons for resisting this goal, but my heart wants me to take it on. I’ve been fighting my heart for weeks, but the heart wants what it wants. Who am I to argue with my deepest heart? Okay, okay, okay…I’m setting a new goal. I will paint fifty paintings before my next blogiversary and I will paint them outdoors.

We have returned from a successful Will McLean Festival. We will have a lot of dyeing to do to get ready for the Florida Folk Festival in May, but now we can afford to order blanks. This was our third Willfest and the other two had cold weather. We sold a lot of long-sleeved T-shirts and socks. This time, we checked the forecast and left the long-sleeved T-shirts at home. We took tank tops instead and that turned out to be a wise decision. It was a good weekend for tank tops.

One thing we love about this festival is that we get to camp right behind our tie-dye booth, which is very close to the main stage. We get to listen to music all day while we’re selling tie-dye and when it gets dark, we just zip up the booth and retire to our campsite, where we can listen to music as we eat supper. If we have any energy left, we can move our chairs closer to the stage to enjoy the music. If we’re exhausted, we can crawl into our tent and continue to enjoy the music as we fall asleep. I can’t imagine a more convenient arrangement. 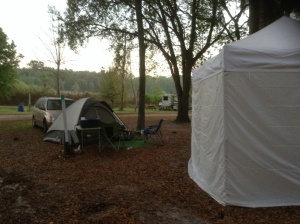 Our booth and our tent 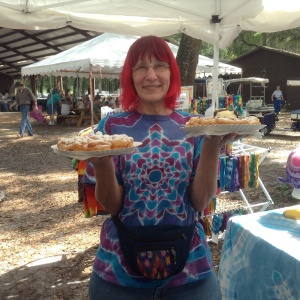 The Boston Cream Pie funnel cake was the best funnel cake in the history of funnel cakes, but it was huge. I learned something new this weekend. A half-eaten funnel cake that has been stored in a cooler for two days is an abomination, but if it has Bavarian Cream on it, I will still eat it. Oh, yeah.

The Will McLean Festival is held at the Sertoma Youth Ranch, which is a beautiful place full of huge trees, a lake that attracts sandhill cranes and a meadow that fills up with mist every morning. It’s so pretty, I ached to find time to paint some of that scenery while I was there, but I just couldn’t manage it. I took a lot of photos with my iPad and I may try to use them as references for a painting now that I’m home, but I know the photos don’t capture the magic of the place.

I couldn’t pull off all the messy set-up and clean-up of a painting, but I did take out my watercolor pencils and sketch something I could see from the tie-dye booth. 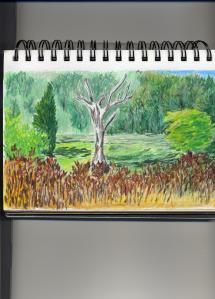 I’m happy that I didn’t take art supplies all that way for nothing.

I think I’ve figured out how Wednesday became my regular weekly blog posting day. I’m pretty sure it was related to a folk festival. I had been posting on Fridays and then on Sundays for a while, but then I must have seen a folk festival coming. I normally drive to a folk festival on Thursday and then I’m without wifi all weekend, so I can’t do blog posts.

I’m thinking about this because I’m getting ready to go to a folk festival. I have festivals where I perform and festivals where I sell tie-dye and one festival where I do both. The one coming up this weekend is the Will McLean Festival, where I am a tie-dye artist and not a performer. It’s my tie-dye partner’s favorite festival because I don’t have to leave her alone in the booth while I go somewhere to sing and yodel. It’s also the one where we don’t bring extra family members. It’s just the two of us, with a tie-dye booth and camping equipment.

We love this weekend, but we sure are exhausted before we get on the road. It’s eight o’clock in the evening as I’m writing this and my daughter is still checking all the lists to make sure everything is loaded up in the van. Everything that’s on a list, anyway. I try to improve my lists by reading Morning Pages from last year to see what I forgot to bring. When I did that this year, I saw that every single day of last year’s festival, I was wishing I had brought art supplies.

I still can’t remember when I found myself with enough down time to want art supplies, but I wrote it in my Morning Pages every day, so I am not leaving them behind this year. The art supplies are in the van. So are a lot of other things, taking up every inch of space, but we’re probably still forgetting something. When I find out what it is, I will write about it in my Morning Pages and we will remember to bring it next year.

I guess I’d better not forget to pack my notebook after I write tomorrow’s Morning Pages. 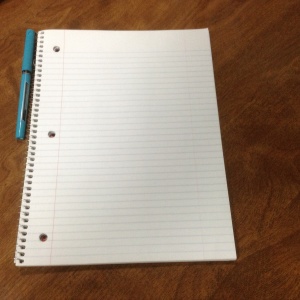 Last week, there was a funny smell in my house. Not funny as in “ha ha”, but funny as in “peculiar.” My husband noticed it first, because he has a more sensitive nose. He wanted me to help him figure out where it was coming from, but that had to wait until it got worse, so I could smell it. Fortunately (?), it did get worse. It wasn’t horrendous, like a dead rat in the crawl space; it was just annoying, like slightly rotten vegetation.

We emptied the kitchen compost tray on the compost heap outside. We took out the trash. We sniffed around the house, trying to figure out where the smell was coming from, but we couldn’t track it down. We noticed it when we were relaxing in the living room, so we started pulling out the chair cushions. We found a few cracker crumbs and candy wrappers, but nothing rotten.

We sprayed Febreze on all the furniture and tried to pretend the smell was gone, but we were not fooling ourselves. It was subtle, but it was there. We looked under the furniture. We looked behind the furniture. Still nothing. We gave up and went to bed. The next day, my husband went back to his job and I went back to my spreadsheets. When I took a coffee break and relaxed in the living room, I smelled it again.

That’s when I thought about my painting space in the dining room and the vase of sunflowers I had left there. I got up to check and, sure enough, the smell was coming from my wilting sunflowers. The older ones looked pretty bad, so I pulled them immediately and threw them on the compost heap. The newer ones were still pretty, so I wanted to try painting them again.

My husband came home and I explained about the sunflowers. The older ones were gone and I was ready to believe the smell was gone, too, but he said it was not. I changed the vase and the water, hoping that would take care of the problem, but the problem was in the flowers, not the water. My supportive husband did not immediately throw the flowers on the compost heap, but I knew it was only a matter of time. It was too late for me to paint them that night, so I made plans to paint them the next day.

My husband is supportive, but he does have a sensitive nose. When I went to my painting space the next day, he confessed that he had sprayed Febreze on my sunflowers after I went to bed the night before. In case you wondered, sunflowers do not like to be Febrezed. I had to take one of them straight to the compost heap, but the other three still looked okay. 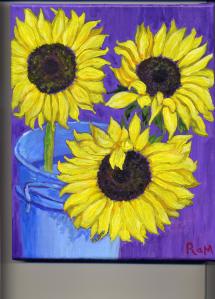 Whew! I got my painting. As soon as it was done, the flowers had to go, but at least they’ve been immortalized on canvas.