I am caught up on my word count for Camp NaNoWriMo. Now I can meet my goal by doing about nine hundred words a day for the rest of July. As I suspected, the process did require pie. 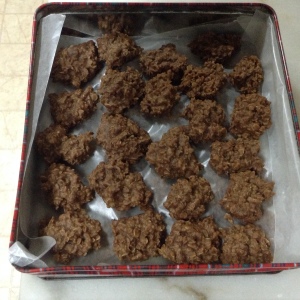 And my favorite flavored coffee.

And one big painting.

The scan is a bit fuzzy and it washed out the sky, which is blue, not white, in the actual painting. This is the biggest one I’ve done yet and it’s different from the rest in other ways, too. It was based on a photograph. I prefer to paint from life, but we saw some beautiful things when we were in North Carolina and I didn’t have time to paint on the Craggy Flats trail. That’s where I took the picture of flame azaleas on which this painting is based. The other difference is that I painted it in stages over several days, instead of all in one sitting.

Of course, the result is not all that I had hoped it would be, but it was a great learning experience. I tried new things. I can’t expect new things to work perfectly the very first time I try them. It’s called “trial and error” for a reason. I am happy that I was able to allow myself to make errors.

I should confess that the other reason I am caught up on my Camp NaNoWriMo word count is that I’m trying new things there, too. I haven’t dropped my word goal, but I have given myself permission to write whatever I want to write. I know I said I wanted to finish my novel from November, but I was so stuck that I was starting to feel like Mozart in that scene from Amadeus where Constanze is trying to get him to work on the Requiem and he looks at her with hollow eyes and says, “It’s killing me.”

Yeah… not a fun place to be. I want to finish that novel, but I’m not going to kill myself over it. This is Camp; it’s supposed to be fun. It can be any type of writing, not just a novel. It can be nonfiction. It can be a collection of poems or short stories. It can be a screenplay if that’s what you want to write. It can even be revisions of a novel you have already written. I’m still writing. I will write thirty thousand words in the month of July. They will all come from my head; I won’t have a character in my own novel read passages from some real, already-published novel to pad my word count. My daughter, who spends time on the NaNoWriMo forums, says that is a tactic some people use.

I may now be a NaNoWriMo rebel, but I’m not that much of rebel. I just set my inner artist free, that’s all. Julia Cameron, author of The Artist’s Way, says that the inner artist is a child. You can’t make a child happy by dragging her, kicking and screaming, to a word processor and chaining her little hands to the keyboard. As soon as I told her she could write whatever she wanted, she started jumping up and down, clapping her hands and saying, “Really, really, really?”

A little freedom was all it took. Well…that and a whole lot of sweets.

6 thoughts on “Fun With Writring”